Object of the Week: Tehuantepec River by Miguel Covarrubias The 1945 lithograph Tehuantepec River by Mexican artist, writer, and anthropologist Miguel Covarrubias (1904–1957) offers a rather romanticized depiction of Mexico’s indigenous community. The image presents a central figure—a woman wearing a simple sleeveless tunic and a long skirt. Her head is covered with a long scarf topped with a small cloth donut that allows her to carry a basket on her head. Presumably, the basket is filled with cloth. As she walks away from the river, other women bathe themselves and wash clothing in mid-ground.

They wear similar apparel. Covarrubias sets the figures against a picturesque background. A river flows beyond both sides of the frame. A small city sits at the base of a hill and is surrounded by other hills and mountains. The artist gives us a quaint image of rural Mexican life where many people do not have modern amenities and use natural resources to handle everyday chores and necessities. 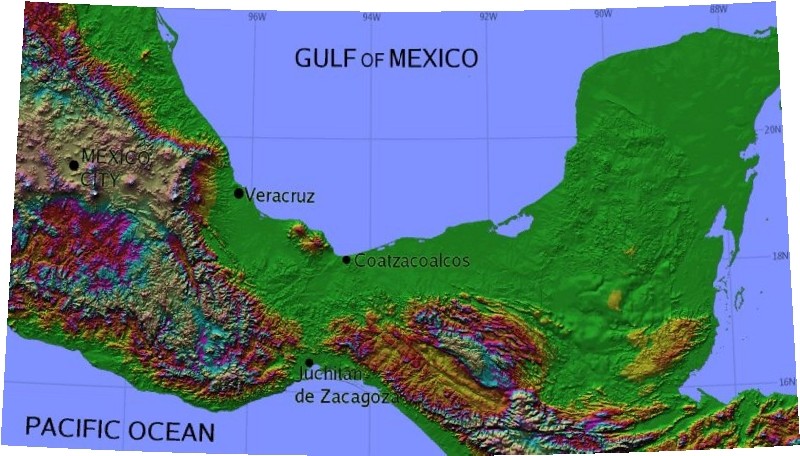 Covarrubias’s print was part of his decade-long research and writing on the Isthmus of Tehuantepec, a narrow strip of land in Mexico’s interior connecting the Gulf of Mexico to the Pacific Ocean.[1] The peoples living there were known as Tehuana. Their colorful, traditional style entered the global stage when iconic Mexican artist Frida Kahlo (1907–1954) wore the garments regularly and depicted them in her self-portraits and photographs.[2] Covarrubias, a contemporary and friend of Kahlo and her husband Diego Rivera (1886–1957), drew dozens of images of the landscape, cultural objects, and peoples of the Tehuantepec region. They also studied the geography, anthropology, history, music, and folklore, which he published in Mexico South: The Isthmus of Tehuantepec in 1946.[3] Tehuantepec River was presumably one of the images from his research. Covarrubias was enamored with Mexico Indian populations as well as those of the United States. Not only was he a prolific illustrator and caricaturist, but he was also fascinated with the cultural history of his nation and others around the world. Growing up during the Mexican Revolution (1910–1920), Covarrubias witnessed and experienced the concentrated effort of the new governmental regime to educate the rural and working classes. The new president, Alvaro Obregón’, introduced policies that included the ideology of indigenísmo, which promoted pride in Mexico’s Indian heritage. Previously, European social ideals were given preference as former president and dictator Porfirio Diaz elevated the elite, white landowners who traced their heritage to Spain.[4] Covarrubias became a young faculty member, along with other artists such as Rufino Tamayo (1899–1991), and taught children and adults through pottery and carvings dating from pre-Hispanic times found from archeological sites.[5] The young artists’ early engagement with archeology influenced him for the rest of his career. He spent the next four decades creating images and major anthropological texts investigating native populations of Mexico, the U.S., and Asia. Early Modern Galleries featuring Collection Conversations Georgia O’Keeffe: A Place of Her Own. The National Gallery of Art and the Chrysler Museum of Art.

Tehuantepec River will be on view in the Chrysler Museum’s early modern galleries starting in April 2021 as part of Journeys Across the Border: U.S./Mexico. The reinstallation of works from the permanent collection will bring together a group of early-to-mid-twentieth-century artists from Mexico and the U.S. who traveled across the border to create and exhibit their works. In decades past, artists from both nations traveled between the countries to learn different artistic techniques. They studied under now-iconic artists and created incredible temporary and permanent artworks. This history has been sadly forgotten or overlooked in recent years due to socioeconomic and political strife. Now is a moment to re-examine and promote this period of artistic collaboration and exchange.